How to Deal With a Leaking Dishwasher Soap Dispenser 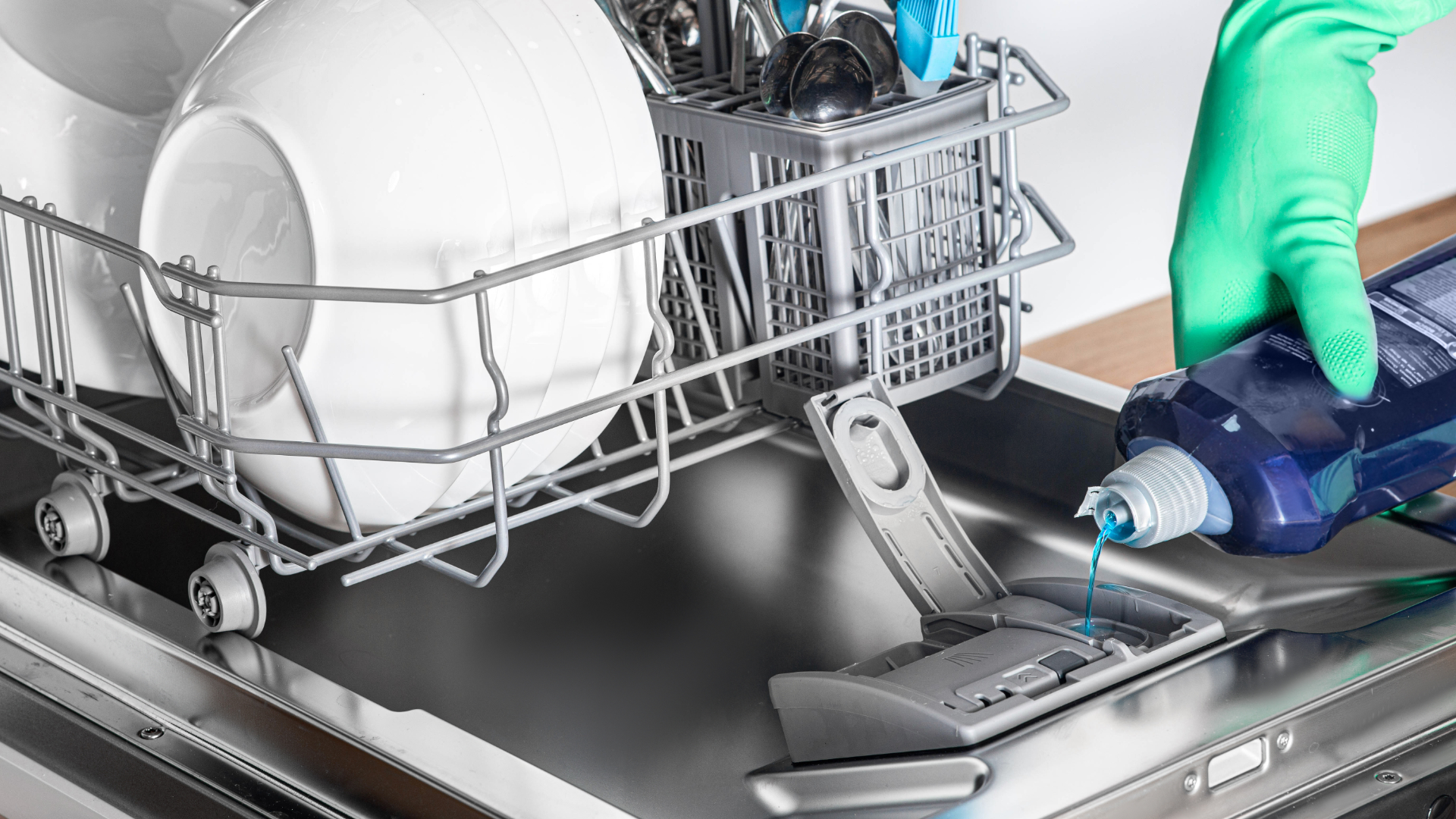 Every dishwasher model is a little different. Some dishwashers have digital controls, some have a mechanical dial or push-buttons. Some are free-standing, most are built into cabinets. But the one thing all dishwashers share is the soap dispenser. The cup and lid may be built differently, but there is always a closable cup in the door that fills with soap and then opens during the cycle. It’s a handy mechanism, but it has its downsides.

Why does the soap dispenser leak and how can you fix it? We’re here to help.

Start by scrubbing away the encrusted soap scum. Dishwasher soap is very thick and it can really gum up the works. Dried, it’s like very clean concrete. Use hot water mixed with vinegar and a scrub brush to wear away at the built-up soap residue. For really thick places that are fully dried, use a blunt metal instrument like the end of a butter knife or a cuticle tool scrape away the layers of dried soap. You may be able to chip pieces away as well.

Don’t be shy about pouring hot water over the dried soap and letting it soak in to make your job easier. It’s only a dishwasher and is used to being wet. A stiff-bristled nail brush or dish brush might come in handy for this task

The next step is to make sure your soap latch mechanism works correctly. Dishwasher soap is bad for any kind of latch. If you have a twist-secured soap dispenser, the dishwasher soap will fill the grooves and the tab so that nothing can connect smoothly. If you have a press-and-click latch, soap will fill the latch and dry so that the two tabs cannot come together and the dispenser won’t close. The more soap that builds up, the more likely your latch is to malfunction. A latch that won’t close completely is also more likely to allow soap to leak, which compounds the problem.

Take a toothbrush and a small tool to the area around your latch. Clear the threads, tabs, and spaces where things should go. Make sure the latch can click or actuate so that it opens and closes at the right times. Clean the latch so that you can easily open and close it manually and so that you’re sure it will open on-command during the correct part of the dishwasher cycle. In most cases, it is safe to pour hot water over the latch as well.

When you close your soap dispenser lid, how firmly do you close it? If the dispenser lid is not secured correctly and fully, little bits of soap will slowly leak out before the latch is supposed to open. This is what creates those slow-drip buildup patterns on the inside of your dishwasher. So take a close look and extra care when closing your soap dispenser lid. Make sure that it clicks firmly closed and that there’s no wiggle if you press on the lid.

If there is a wiggle, especially if the lid can close a little more after the latch, this is a sign that your soap dispenser might not be well-sealed. However, often you can fix the problem with a little extra firmness. Press firmly on the lid when you snap it closed or twist more firmly for the twist-to-close dispenser. If necessary, you may need to clean or scrape soap residue from around the edge of the dispenser cup. If there is a crust around the edge, it could be preventing your dishwasher soap cup from sealing when closed.

Don’t Leave Soap In the Dishwasher Not Running

This happens most often when a person fills their dishwasher but isn’t quite ready to start it. The soap cup then sits sideways and subject to gravity, it will push itself out of the soap dispenser, if possible. It makes sense to fill your dishwasher ahead of time. It keeps your sink clear and makes your dishwasher quickly ready to run. But don’t put the soap in until you’re about to push the button.

Clean or Replace the Seal on Your Soap Cup

Some soap dispensers are designed with a gasket seal that actually holds the soap ineffectively. That is, until the first time it’s coated in thick dishwasher soap that encrusts the gasket and neutralizes the sealing effect. From there, more soap builds up on the lip and pushes up the lid so that more soap can escape. Start by cleaning off your gasket with warm water and firm scrubbing with the soft side of a sponge. If you manage to get the gasket clear, try your soap dispenser and see if it seals again. If not, you may need to replace the gasket with a new one that is not soap-encrusted, then take an effort to reduce any causal soap leaks.

Add a Seal to Your Dispenser

It’s also true that most soap dispensers don’t have a gasket. The good news is that one might be added. Take a close look at your soap dispenser cup and where the leaking is occurring. By adding a gasket at the connection, you can create a liquid-tight seal and lock the dishwasher soap into the cup until it’s ready to be dispensed.