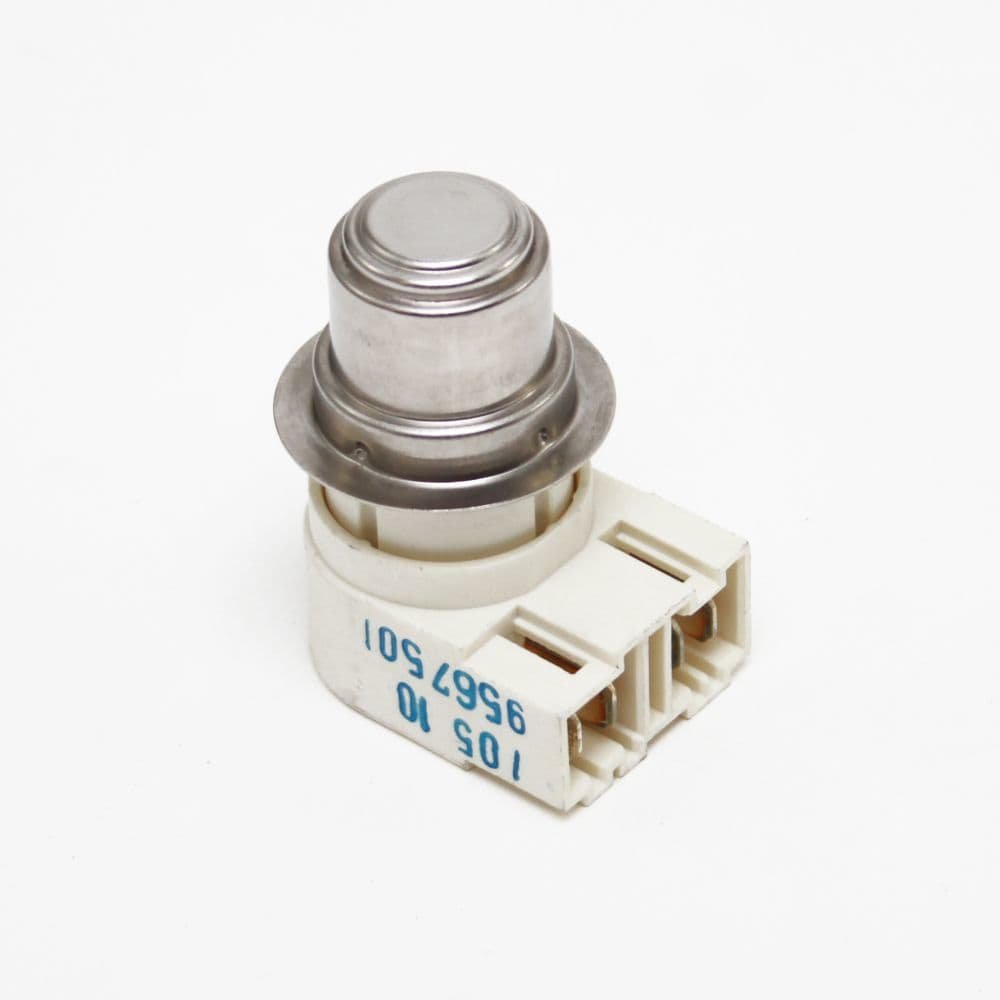 Dishwashers need to use hot water to effectively clean dishes. The temperature sensor with a hi-limit thermistor monitors the water temperature to stop it from getting too hot. It can shut off the heating element if the gets too high to keep the machine and surrounding area safe. But if the sensor shorts or breaks, it can’t regulate the temperature in either direction. If the water is getting too hot or isn’t heating at all, it may be time to replace the sensor. Order replacement part #00165281 for your Bosch dishwasher and follow these steps to replace it.

1. Unplug the appliance and turn off the water.

Before you start any repairs on an appliance, always make sure it’s unplugged or the corresponding circuit breaker is flipped. This keeps you, the appliance, and the surrounding area safe. During the course of this repair, you will also need to uninstall the dishwasher, so shut off the local water connection first.

Remove the lower access panel. To do so, loosen the screws on either side and set them aside. Also, set the panel aside.

Open the door and set it flat. Pull out the lower dish rack and set it aside to keep it out of the way for later steps. Remove the six screws around the perimeter. Then carefully close the door. Slide the outer door panel down to release it and set the panel aside.

Next, locate the two screws securing the plastic bracket and inner access panel right above the lower panel. Set the parts aside. Disconnect the water line and the drain hose under the sink. Remove the screws holding the under-counter brackets secure. Pull the dishwasher out.

Locate the side panels at the bottom of each side of the dishwasher. Remove the screws that secure each cover and then set the covers aside.

Now you can remove the plastic hinge covers and hinge hooks on each side. The hinge covers can just be pulled away by hand. For the hinge hooks, use needle nose pliers to grab the wire below the plastic attachments and pull them back and down off the hinges. They have a lot of tension, so move them carefully.

Carefully set the dishwasher on its back without pinching any hoses or cords. Once it’s on its back, you can start to remove the circulation pump assembly. This is where the temperature sensor with the hi-limit thermistor is housed.

First, locate the white water inlet to sump hose on the left-hand side of the bottom of the dishwasher. Pull the hose out of the white sump assembly and the retaining clip, and then twist it out of the way. Next, wiggle the white base lower on the bottom of the dishwasher. During the previous step, you loosened everything that secured the base tightly in place on the appliance, so it should come down a few inches with a bit of pulling. The base won’t come completely off; you just need more space to pull out the assembly.

After that, remove the boxy drain pump that lives behind the inlet hose. To remove it, you’ll need to press in the retaining tabs and twist it clockwise until it snaps free. Pull it out and set it down inside the machine. Then press down the retaining tabs at the circulation pump (by the collection of wires) and the sump. Also, release the drain outlet hose from the sump and let it stay inside the base. Now you can remove the sump and circulation pump assembly from between the base and the body of the dishwasher. It’s still connected to the appliance through its wiring, so just set it on top of the dishwasher door instead of setting it aside.

5. Replace the temperature sensor with the hi-limit thermistor.

Remove the black o-ring from around the metal part of the sensor and slide it into place over the new sensor. Now you can install the new part. Use your finger to apply some soap around the metal portion and o-ring so it slides into place more easily, and then push it into the opening in the circulation pump housing. Make sure you hear the locking tabs engage and that the sensor is oriented with the wire ports to the left.

After that, plug in the two wire connectors. The plug with the two red wires should go in the top terminal port. The blue and orange wires go into the bottom port. Next, reinstall the cover by snapping it in place.

The untreated buildup can eventually displace the gasket and cause future malfunctions.

6. Reassemble the base of the dishwasher.

After that, twist the water inlet hose back around and push it into the front of the assembly. Slide it behind the retaining clip to secure it in place, too.

Now you can carefully tilt the dishwasher back so it’s right-side-up. Resecure the base with the four screws you removed earlier.

Next use needle nose pliers to reattach both hinge hooks into place to secure the door. Also, snap the hinge covers back into place by hand. On each side, slide the bottom side covers into place and secure them with the screw near the front of the dishwasher.

Slide the dishwasher back under the counter. Open the door again and resecure the dishwasher in place by screwing the brackets against the underside of the countertop. Shut the door. Next, reattach the inner access panel and plastic bracket that lives behind the exterior door panel. Secure these parts with the two screws. After that, slide the exterior door panel up into the groove behind the control panel. Press down the bottom corners until they click into place. Then open the door again and add back the six screws along the perimeter of the door interior. Then reattach the lower access panel and secure it with a screw on each side. Reattach the water and drain lines, and plug the machine back in.

Now that the repair is complete, turn the machine on for a trial run to check for any leaks. For more appliance repair procedures, go to Fleet Appliance. You can also contact our teamto set up an appointment with one of our trained appliance repair technicians.

How to Replace a Dryer Vent Hose

How to Replace the Gasket Seal on a Refrigerator Door

Dryer Making Noise But Not Spinning: How To Fix It

LG Dryer Error Code D90: How to Fix It

Samsung Dryer Not Working? How to Fix It

Samsung Washing Machine Error Code 4C: How to Fix It

How to Fix a GE Washer Not Spinning

How to Fix Condensation in Dryer (in 4 Steps)

How to Fix Heating Element in Dryer

LG Refrigerator Not Cooling? Here’s What To Do

How to Fix a Refrigerator Door Seal (in 8 Steps)

How to Fix a Samsung SUD or 5UD Error Code

How To Fix A GE Refrigerator Making A Loud Humming Noise